The Hunger Games and Roman History

The following essay is written by Guy Bradley and relates to the sciSCREEN centering on The Hunger Games.

The Roman allusions in the Hunger Games are myriad and clearly intentional. Suzanne Collins has stated in interviews that the ancient world, and in particular gladiatorial games, was the inspiration for the idea of an autocratic government forcing people to fight to the death for the entertainment of the masses.

The link is made explict throughout the series. To give some examples. The name for the fictional state of Panem, Latin for bread, is a direct lifting from Juvenal’s (and Fronto’s) famous phrase that the plebs are only interested in panem et circenses, bread and circuses. Juvenal is referring to chariot racing in the circus, circenses, but Collins draws more heavily on the gladiatorial games. The term ‘Games’ comes from the Latin ‘Ludi’, originally meaning festivals with a variety of different entertainments (gladiatorial combats became popular only towards the end of the Roman Republic, and never surpassed chariot racing). 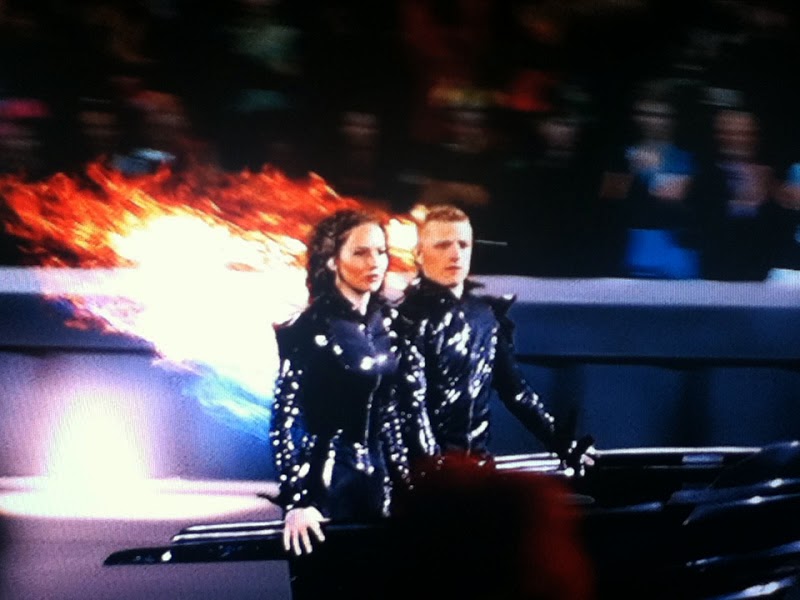 The idea of a Capitol dominating and exploiting its outlying districts echoes the primary place of Rome within an empire made up of provinces. The names of the privileged elite in the Capitol are predominantly Roman, creating overtones of a Rome-like decadence. For instance, the autocratic president Coriolanus echoes the arrogant patrician of the same name from early Rome; the gamesmaker Seneca, like his namesake who was an advisor the emperor Nero, is forced to commit suicide by an all-powerful leader. Other names are Roman in origin, but less directly mirror their ancient counterparts: the talkshow host Caesar alluding to the dictator Julius Caesar, and Plutarch, a Greek biographer in the Roman empire whose work inspired many of Shakespeare’s ancient characters

It is not just Rome that provides the source material here. The 'Reaping' of tributes consciously reworks the Greek myth of Theseus and the Minotaur. Crete demanded a regular annual tribute of youths from Athens, who would be sacrificed to the Minotaur in the Labyrinth. Collins says that Katniss is a ‘futuristic Theseus’, the hero who volunteers to face the Minotaur and by killing him overturns this cruel system. Spartacus is another acknowledged allusion, a slave forced to fight in the arena, who then leads a rebellion against Rome – luckily Katniss meets a better end than his followers, who were crucified along the Appian Way.

The Games themselves echo many Roman themes. Just as in Rome, the staging of the Games is as important as the event itself. The tributes are paraded before the adoring crowds in chariots, just as gladiators paraded in their colourful armour before fighting. Gladiators were typically slaves, condemned to fight; yet they could win considerable prestige through success in the games, and the lure of the arena was such that even free Romans volunteered on occasion to fight.

Training and skill mattered as much to Roman gladiators as in the Hunger Games. In the Hunger Games the tributes from some districts, career tributes or ‘Careers’ for short, are trained for the Games from an early age. All tributes get some rudimentary training in weaponry and survival skills, in the equivalent of Roman gladiator barracks, with help from winners of the Games (just as gladiator trainers, lanistae, were often retired gladiators). Like gladiators, some tributes have specialised training in various weaponry, though archer gladiators were rare: presumably the risk to the audience was too high, though predictably the ‘bad’ emperor Commodus had a go on regular occasions. In the Hunger Games, comparative amateurs come up against more highly trained adversaries. Untrained tributes are expected to have little chance and in Rome, highly trained or veteran gladiators seemed to have much better chances of winning. However, one of the most notable contrasts with Rome is that the imagined scenario is more bloodthirsty than most gladiatorial games. One of the surprises that has emerged from modern study is that gladiators were relatively infrequently killed. They spent much time training, didn’t fight very often, and it’s estimated that only 10% or so were executed by their opponent when they lost in the 1st c. AD. The editor, the provider of the Games, has a financial incentive not to allow too many gladiators to be killed off: they represented a substantial investment of his time and expense that it would be better to reuse later. The Darwinian scenario of the Hunger Games is closer to the execution of prisoners by sword and by condemnation to the beasts that accompanied the more ritualised and carefully staged pairings of gladiator types.

There are some interesting parallels between the behaviour of the audience of the arena and of the Hunger Games, though the televising of the spectacle leaves the audience more detached from the action. The whims of both, and their thirst for blood, ultimately drives the spectacle and influences the outcome. The gamesmakers manipulate the situation to favour particular outcomes, and play the audience. In Rome the emperor is the primary patron of the plebs, and losing them would make his position precarious. Appealing to the crowd and to the verdict of the gamesmaker/editor is critical in both scenarios, and more realistic than films like Gladiator, which probably underplay the gladiators’ subjection to the whims of the crowd.

Clearly then this is not a positive conception of ancient Rome: contrast, for instance, the way that the founders of the US constitution drew on Rome for its Republican political models. Roman history has always been a source of negative as well as positive examples, from which you may, as Livy says, ‘select what to emulate and what to avoid’. Inevitably it is difficult to escape the influence of our sources: the Hunger Games draws on the moralising perspective of ancient authors like Juvenal to emphasise the complicity and shallowness of the audience. There’s also something of Gibbon’s outlook from the Decline and Fall of the Roman Empire in the decadence of the Capitol’s corrupt elite. But some elements are rather perceptive and plausible, particularly the reflections on power and popularity, and the emphasis on the nexus of elite power and the whims of the audience. Just as the gladiatorial games were ultimately a manifestation of the powerlessness of slaves in Roman society, so the Hunger Games provides a powerful warning about the consequences of autocracy, wrapped up in some surprisingly traditional clothing.
Posted by Jamie Lewis at 04:10