Hearing Our Voice: The Stigma of Stammering By John Evans

The following is a piece written by John Evans - a trustee of the British Stammering Association - and relates to our sciSCREENing of The King's Speech last night.

My contribution to this debate comes from two directions:
First I want to give my reactions to the film based on my own experiences of stammering, and receiving speech therapy. Second, I want to talk about how this film might help to change public attitudes towards stammering. This is perhaps the first major film that has treated stammering as the frustrating and painful disability it is, rather than as a source of amusement.

I commend Colin Firth for his fine performance. He made me feel most uncomfortable, and I understand he felt very uncomfortable himself as he acted out the part. In one interview about the film he has said, “It had an effect on my body, this film, particularly headaches.” Stammering has then been called an “iceberg”. The part of the stammer that can be seen is represented by the part of the iceberg that is out of the water. However, by far, the bigger part is the shame and guilt induced by the stammering, lying below the water. A good actor, like Colin Firth, is able to portray that shame and guilt so that everyone can feel it. His performance was good and it was truthful. 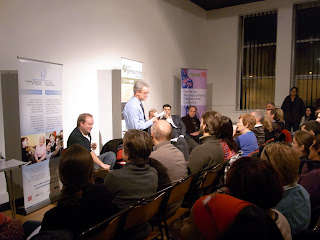 As we know, stammering is seen as a bit of joke in so many films. But the oldest joke about stammering is a rather sad one. The joke is that there is a cure for stammering that works 100% of the time – guaranteed. What is it? The answer is that all you need to do is to stop talking! That is exactly what many people who stammer find themselves doing - they become retiring people whose voices are not heard. For me then the high point of the film was to hear Albert Windsor, cry out, “I have a voice” - and to know that he did make that voice heard: a voice not of perfection, or grand oratory, but of dignity and courage. Oscar nominee, David Seidler, who wrote the screenplay of the film, has stammered all his life, and I feel sure that scene draws on his own life’s journey.
But what helped the future King find his voice, and become a symbol of a Britain struggling against adversity? From my experience I would like to mention three things, which the film brings out well:
First, his own sense of who he was - that he mattered, that his values mattered and that it was important for him to live his life according to those values. He felt he had a destiny that was bigger than his feelings, bigger than his fears. He accepted that he needed to fulfil that destiny as best he could, with his handicap. He was, of course, never able to remove his stammer completely, and after some time, he probably never expected he would. One of the hardest things about going for speech therapy for the first time as an adult is when you say, “Please tell me how to make this go away – I will do anything – I just want to be normal” only to be told, “At your age, it is probably not going to go away. All we can do is to help you to manage it.” That is not what you want to hear – yet it is often possible to manage a stammer very well, to reach an accommodation with it, and to live a happy and fulfilled life.
Second, I would point to Albert’s determination and his willingness to work hard, to call himself into question, and to accept a great deal of distress. He initially gave up on the therapy because it was so difficult for him to deal with that pain - and I am not referring to the scene about the marbles!
Third, there was something I would call, “enabling love”. There was the unconditional love of his wife, known for so many years as the Queen Mother. There was the expert friendship and care of Lionel Logue. We are not privy to the exact range of methods he used with Albert Windsor, but on the web-site of the British Stammering Association, you can find an article by a man whom he treated, Richard Oerton. Richard was a child when he received treatment from an elderly Lionel Logue. He vividly recalls Logue’s kindness and acceptance.
Stammering is a condition that does not respond very well to will-power on its own. However, when effort is applied in the right direction, and when we are liberated by that mysterious thing called love – or grace – then we can learn to find our true voice and make it heard. What traps us all in unhelpful behaviour patterns is the opposite – ridicule, humiliation and shame, leading to secrecy and withdrawal. Laughing at people who stammer tends to lock them into their stammering. So many people who stammer bear the scars of ridicule in school from teachers acting, often with the best of intentions, like Albert’s father, King George V, and from other schoolchildren acting … like schoolchildren.
The effect of the film on attitudes to stammering has been palpable. Stammering is becoming something that can now be talked about openly. At least one stammerer has been portrayed as a hero. However, the message of the film will need to be sustained once the Oscars are over. That is why the British Stammering Association has launched a continuing “Appeal for change”. Part of this is to make some basic facts about stammering known, for example:

I trust and believe that people will look back on The King’s Speech not just as an inspiring and successful film, but as an example of how the media has been able to influence our culture, and as an event that changed public perceptions about stammering for the better.

If you would like to find out more about the appeal John is referring to, please visit the British Stammering Association's website here.