Into Eternity: Remembering to Forget our Nuclear Legacy By Chris Groves

The following is a piece written by Chris Groves formerly of BRASS and now at Cesagen and was delivered before the film Into Eternity as part of Chapter Arts Centre's Green Festival.

When asked whether he would leap in a river to save his drowning brother, the biologist J. B. S. Haldane is reputed to have said that he would risk his life for two brothers or eight cousins. Haldane’s response reflected what he felt to be the difference, from a biologist’s perspective, between what he shared in common with his own siblings on the one hand, and children of a parent’s siblings on the other. Aware that you’d typically share half your genes with a brother or sister, and one-eighth with a cousin, he was able to give a precise estimate as to the weight of his sense of obligation in either case.

We might feel inclined to similar conclusions, should we be asked what we might do for future people. Our children command great, unconditional sacrifices, our grandchildren maybe somewhat less, and so goes a pattern of weakening bonds that goes to encompass our great-grandchildren, great-great -grandchildren and then further generations we will have little or no chance of meeting. What makes the difference here? Even if we don’t share Haldane’s genetic frame of reference, then there will be other considerations: the increasing temporal distance which makes the identities of future descendants increasingly mysterious, for example, along with the uncertainty about how what you do during your lifetime might impact upon those more distant, unimaginable generations. And each generation ahead of us will stand in the same relationship to its children as we do to ours, further weakening the sense of a unique morel connection between us and temporally-distant others.

Into Eternity focuses on a by-product of our everyday lives which undermines these kinds of assumptions, and places us in an inescapable, uncannily intimate, yet thoroughly fragile relationship with people who will belong to, not the third, fourth, sixth or tenth generation to follow us, but to generations tens of thousands of years distant. There is somewhere between 2 and 300,000 tons of high –level nuclear waste (HLW) extant worldwide, produced mainly within fission processes in reactor cores. Such waste will threaten dangerous radioactive contamination of the environment – air, soil and groundwater, for up to 100,000 years. The film thus concerns our non-negotiable duty of care to deal responsibly with this waste for the duration of this period.

This responsibility has no historical precedent – it means taking care of not just one generation, nor two or even three – but hundreds of generations. Framed as a kind of letter to these future generations, Into Eternity presents us with the starkest form of a basic contradiction that arises from our dependence upon advanced technologies. This contradiction concerns how these technologies enhance our capacity to act in a way which races far ahead of our ability to understand the consequences of our actions.

Scientific knowledge of the natural world over the last couple of centuries has enabled humans to penetrate deep into and remodel the structure of matter – leading to the development of synthetic chemistry, to molecular biology and biotechnology and most recently to nanotechnology. But despite granting this power, scientific knowledge is not necessarily equally successful in predicting the future outcomes of how these technologies are used. At the same time, its obvious efficacy here in the present tends to make its beneficiaries overconfident that these limitations will be overcome in the future.

As the 20th century wore on, industrialised nations were repeatedly confronted by evidence of the existence of this gap between action and foresight. The assurance that scientific knowledge could transform the future from a terrain that had once been imagined as belonging exclusively to supernatural agencies or to fate into an infinitely malleable terrain of endless progress, was shaken by discovery of the unintended consequences of the use of DDT, polychlorinated biphenyls (PCBs), benzene, heavy metals, endocrine disrupting chemicals, thalidomide, asbestos, and so on.
Instead of being the rightful domain of human progress, the future began to be imagined as a terrain of risk, of new uncertainties derived, not from our dependence on nature, but from what the philosopher Alfred Nordmann (2005) has called “naturalised technology”, technology whose latent effects across space and time are essentially incomprehensible to the present. Instead of a belief in progress, industrialised societies often manifest an attachment to security and safety. The irony here is that, the authorities tasked with governing the risky future generated by their societies’ dependence on advanced technologies respond by seeking to develop better scientific means to predict when and how potential hazards might eventuate, even as the temporal scope – the “timescape” (Adam and Groves 2007) – of their responsibilities extend ever further into the future, as evidenced by anthropogenic climate change, the release of genetically modified organisms - and nuclear waste. The desire for safety brings a greater desire to trust the promise of scientific prediction, even as it becomes more and more fragile in the face of the tasks we set it.

In Into Eternity we are introduced to a variety of people – scientists, engineers, tunnellers, politicians, administrators, even a theologian – involved with the construction in Finland of Onkalo, a 500 metre deep waste storage facility which will be completed sometime next century, and within which will be buried the HLW from Finland’s nuclear programme. A facility, as one interviewee within the film points out, only for the waste from one small nation (how many others will be needed…?). 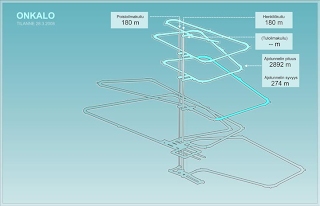 [Image from http://en.wikipedia.org/wiki/Olkiluoto_Nuclear_Power_Plant]
Addressing itself to future people who have opened the facility and discovered it contents, the film maps the various moral positions adopted by different actors in response to the inescapable yet indeterminate future-oriented responsibility incarnated in Onkalo. Is the safest thing really to place the waste deep below the surface (imagined by various participants as unstable, unsafe, constantly changing) within the bedrock, where the clock, as one interviewee puts it, moves more slowly than up above? If so, should future people be warned about what lies beneath the surface? And how can this be done? How can we expect to communicate with people who will live up to twenty times further into the future than the history of human literacy stretches back into the past?

For a number of those intimately involved with the planning and construction of the facility, the best thing would appear to be to protect the facility from all human interference – and so to move it entirely out of sight, out of reach, and out of mind; to erase, to actively forget its existence. Yet how will we impose this forgetting on future generations: how will we, and they, remember to forget? Perhaps the most arresting sequences from the film are those concerned with the blasters and tunnellers, who descend into the tunnels in the darkness of the early morning and return from work at night, engaged in the repetitive labour of setting charges, blasting, excavating and clearing. Like the masons of medieval cathedrals, they will likely not live to see their work completed. Yet, if the moral perspective of those who believe in the need to forget carries the day, then the efforts of the workers creating Onkalo will have been devoted not to erecting a monument to the values of the present, but to eradicating all their traces.

For more on the ethical aspects of our relationship with technology and future generations, see the website for the In Pursuit of the Future project.
Posted by Jamie Lewis at 10:39