What did I learn from The Garden? Steve Garrett

This is a short essay by Steve Garrett of Riverside Market relating to our sciSCREENing of The Garden in November.

Politics is all about power. Politicians cannot be trusted, as they play the power and influence game.

Not all community workers are saints.

People like Horowitz (the landowner) apparently put their bigotry even before profits.

Conflict will arise within even the most well-meaning group.

Getting huge publicity and celebrity endorsement does not guarantee success.

Any campaign relies on a very few highly motivated and skilled individuals.

If you hang in long enough external circumstances may change in your favour.

There might not be a happy ending – but new and unexpected hybrid ideas may spring from the compost pile of failure (and they haven’t given up yet).

I’ve been working in Wales for more than twelve years to build alternative and economically viable, environmentally sustainable local food chains that bring benefits to Welsh producers and community members in Cardiff. 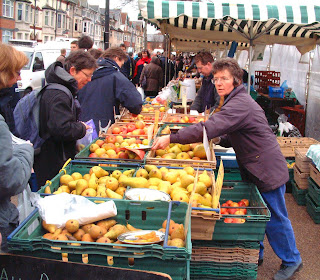 Why? – I love markets, I want a future world for my kids and I hate Tesco. So – I set up a social enterprise which runs farmers markets, a community allotment, a programme of outreach and education activities and most recently market garden horticulture and training enterprise. I know I am in very good company in this work with many excellent projects in Wales and the U.K.

That’s a good feeling – and the people I have met – traders and customers – are in my experience human beings at their best. The only possible losers to this work might be supermarkets – other than that it is a win-win-win situation on the Triple bottom line. It also contributes to Gross National Happiness…that’s the best part.

There is a deep instinct in all of us to re-connect with the land (Mother Earth) and to engage with the deeply satisfying process of growing food. At the same time, most of us are grateful that we don’t have to get up at dawn to tend to animals or spend all day in the fields planting, weeding and harvesting But luckily there are people who seem to like that – and the purpose of an economy is that they can be free to do that while I am free to hopefully do something that I enjoy and other people need.

Meanwhile in their rapacious expansion, the large food retailers and producers have so dominated the food economy in the West (Food Inc) and in their endless search for greater profit at any cost have developed a wasteful, in humane but profitable system that depends entirely on oil. It can’t last, oil is running out – so it is intelligent if nothing else for us to devise a different system that is rooted in how the world works – and in the past two years there have been all kinds of programmes, films etc. echoing this message

The Welsh Assembly Government launched a Community Grown Food Action Plan which was an addition to the other range of policy documents and strategies relating to local food that have come out of the Assembly in recent months. It’s a welcome statement of support for the concept, However, I personally think it fails to adequately identify and suggest ways to address the biggest obstacle to more food growing in Wales – that is access to land. As simple as that. Groups and individuals all over the country who are looking to grow food are running into obstacles from local authorities and landowners which prevent them from just getting on with it.

This wasn’t the case during the war, by the way, when because of food shortages areas of Roath Park and many school playgrounds were ploughed up for planting as a part of the war effort. And as someone reminded me recently – there’s no such thing as ‘Council’ land – it’s all our land which they manage on our behalf, and perhaps we need to be inspired by our French comrades and be a bit more insistent about having our demands met by the powers that be.

The concept of Transition Towns has been a helpful one and a useful idea that people can get a hold of and understand. The basic message is: things have to change. Because external circumstances are changing rapidly and in ways we can’t predict. I sometimes feel as if we’re in a Titanic situation – everything seems safe and sound, but if we don’t change course, disaster is coming

The typical human response is to carry on with life-as-normal until there is a crisis and then get in a panic. But sooner or later we may find ourselves having to mimic the actions of the Cuban government which quickly allocated land and seeds to as many people as possible in cities like Havana to grow food to make up for the shortfall resulting from the normal oil-dependant agriculture system farms when the Russians cut oil supplies to Cuba.

So – although there still seem to be plenty of people willing to carry on buying strawberries in November as if everything is OK – and perhaps they fly to Spain for a winter break - there are green shoots of hope. The demand for allotments across the UK has gone through the roof in recent years, and the level of supply cannot keep up! At the same time The Federation of City Farms and Community Gardens has been supporting groups across Wales who are keen to enjoy all the benefits of horticultural therapy.

Boris Johnson is aiming to support 2012 growing spaces in London before…you guessed it…2012 (How long before we are drowning in a sea of 2012 related marketing? I think it’s hilarious that the two main sponsors of the Olympics are MacDonald’s and Coke, leading Tim Lang to make the observation that the games will end up being the super-fat watching the super fit).

Meanwhile, the public at large can have an influence on the emergence of a more balanced and beautiful food economy by cutting back on buying out of season, frozen and processed and imported food; throwing less way; buying local when possible; and digging up their lawn to plant potatoes. (In Australia now – land of the big front lawn – the new way of keeping up with the neighbours is by showing off the size of your lettuces which grow there, rather than the size of the car in the garage).

Chapter Arts Centre is doing it’s bit with a wonderful edible landscaping project in front of the building, And maybe before long we’ll see status-seekers and cool people wearing muddy wellies to show what they’ve been up to that day, and being sure to leave (or apply) plenty of dirt under their fingernails before going out on the pull.
Posted by AndyB at 06:37