Monstrosity and the Wolfman in Media and Culture By Rebecca Williams

Below is an essay by Dr. Rebecca Williams from the Communication, Culture and Media Studies Unit at the University of Glamorgan and relates to our sciSCREENing of The Wolfman in March.

Tropes from the horror genre continue to fascinate and frighten us across a range of contemporary media forms including television, literature, and film. Indeed, the final line of Joe Johnston’s ‘The Wolfman’ perhaps sums up one of the questions so central to discussions over the representation of the werewolf, and cinematic monsters more broadly, within media and cultural studies. The final words of the movie echo those uttered earlier in the narrative - “It is said there is no sin in killing a beast, only a man. But where does one begin and the other end?”.

It is this inability to distinguish man from monster – the threat of existing as neither and being in a perpetual state of inbetween-ness – which the horror genre has often tapped into through its depictions of the monstrous. At the centre of this fascination stands the figure of the ‘monster’; the ghost, vampire, or in the case of ‘The Wolfman’, the werewolf. Figures such as these have often functioned as objects of fear due to their ability to straddle the established cultural boundaries which we have come to view as safe and as non-permeable.

Writers such as the psychoanalyst Julia Kristeva and the film theorist Barbara Creed have suggested that it is the ability of the monstrous figure to violate and threaten such boundaries that is the source of their horror. The figure who can cross between life and death, between male and female or, in the case of the Wolfman, between man and beast has been at the centre of media and cultural studies approaches to horror for decades. In violating our expectations of nature and humanity, such representations continue to attract audiences. For example, the violation of the boundary between man and beast is rendered quite literally in the effects sequences that depict Lawrence’s transformation into the wolf, complete with ripping skin, the extending of teeth and the crunching of bones as the body transforms. This emergence of the animal within quite graphically displays the disintegration of the body’s boundaries. 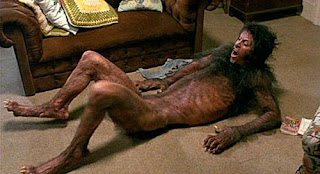 The famous transformation scene from An American Werewolf in London

However, the werewolf is not always a one-dimensional object of repulsion and terror. The horror genre has always offered more complex representations of the monstrous; presenting figures who might frighten and terrify but who are also often sympathetic characters who elicit our compassion. Throughout horror film’s history characters such as the Wolfman have occupied this dual role of arousing a range of responses and sensations, from fear to empathy and understanding. Within ‘The Wolfman’ there exists such a tension between horror and sympathy for Benicio del Toro’s tormented Lawrence Talbot. The audience may feel repulsion at his acts since the film does not shy away from fairly graphic representations of the bloody violence inflicted upon humans by Talbot in wolf form. Images of blood, entrails, bodies ripped apart are all represented on screen, showing in some detail the destruction of the body of man by the far stronger beast. However, the film also portrays Talbot as a flawed and tragic hero – many of his victims cannot be easily seen as entirely innocent since they include a group of suspicious and intolerant villagers who threaten to kill Talbot and several medical practitioners who have been responsible for tormenting him in the name of science and mental healthcare at an asylum in London. Furthermore, the film also presents an even worse form of monstrosity through the figure of Lawrence’s father John who is characterised as a true villain who delights in the power of the wolf and who urges Lawrence to embrace the glorious possibilities that lycanthropy offers. In refusing to make Lawrence’s character the true monster within the film ‘The Wolfman’ follows the horror genre’s tendency towards representing varying degrees of monstrosity and often limiting the monstrosity of lead characters by constructing an even more horrific and villainous monster who can become the true object of fear and loathing.

Several writers have noted the links between werewolves and femininity due to the connection of their transformations to the lunar cycle and its associations with female menstruation (for example, this is a clear theme in the 2000 werewolf movie ‘Ginger Snaps’). However, ‘The Wolfman’ avoids the potential feminisation of the male via his links to the wolf and instead presents ideas around tragic family legacies and the family/hereditary nature of Lawrence’s predicament, issues of masculinity, and whether human capacity for brutality can in many senses be considered ‘worse’ than that of the beast. Anthony Hopkins’ characters’ delight and joy in the power of his monstrosity contrasts with Lawrence’s obvious pain and regret at the violent acts he has committed whilst in wolf form. Linked to the depiction of the relationship between father and son are issues surrounding masculinity and what it means to be a man and The Wolf Man can be argued to depict masculine struggle with the ‘beast within’. Certain cultural theorists have linked this to issues around identity and subjectivity in which typical patriarchal order can be threatened by the eruption of the un-tamed beast within which disrupts the norms of society.

Furthermore, in one powerful scene between Lawrence and Emily Blunt’s character Gwen, the emergence of the beast is strongly linked to Lawrence’s desire for Gwen. As she dresses his wounds, he becomes drawn to her chest and her neck – suggesting the blood lust of his beastly alter ego but also making a clear association with sexual desire and the impropriety of acting on such feelings. In the nineteenth century society of the film’s world, the repression of the inner beast can be read as a metaphor for the struggle between proper behaviour and natural animal desires. Whilst a range of different interpretations of the film can be made from within media and cultural studies approaches, Joe Johnston’s reworking of ‘The Wolfman’ shows that our fascination with monstrous figures endures, and continues to represent issues around identity, cultural norms, and our fears of those who appear to be able to cross the established cultural boundaries we take for granted within contemporary society.