If I use the analogy of poetry upfront, this film is a visual poem that is devoted to mothers, grandmothers and sisters from all of us, monstrous beings who owe our lives (and sanity) to them. This incredibly rich and complex film touches upon a number of issues but in this short essay I would like to see this film as a beautifully crafted work that plays with the socially constructed concept of sanity and insanity. Unsympathetic but observant — a local GP picked up the fact that Mija could not think of the word ‘electricity’ and suggested further examination — medical practitioners diagnose that Mija is the early stage of Alzheimer's disease. She is told that she is bound to become more forgetful, first nouns and then verbs so she will need to be looked after. But Mija’s situation means she is far from this possibility, she is not only looking after her teenage grandson on behalf of her daughter who lives away, but she is also a part-time carer for an affluent elderly stroke victim. Besides, Mija doesn’t seem to find the diagnosis affecting her life in the slightest. She can explain what electricity, soap, and bus terminal, are without remembering the exact term. In fact, she is perhaps the sanest and the most vigorous person among the entire characters in the film. However, as the film captures brilliantly, society sees it otherwise. Her love of flowers — in Korea a keen interest in flowers is somehow associated with insanity — and her keen interest in writing a poem — at her age and given her circumstances — attract unwanted attention from various people. As the situation around Mija gets worse, her bubbly personality and flowery outfit seem to become more and more absurd and mismatching. She asks questions abruptly in the middle of her poetry class and she burst into rather nervous laughs. 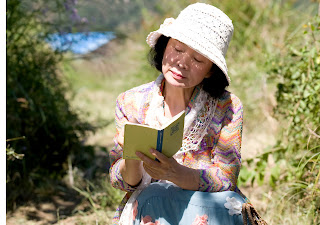 We have this satirical expression in Korea: family welfare, as opposed to public welfare. This means all sorts of welfare issues (including physical and mental welfare, disability, financial difficulties) are taken care of by the family, and female members of the family, more precisely. The sister of Mija looked after Mija when their mother fell ill and Mija herself is both a paid and unpaid caregiver. Most male characters depicted in this film are lazy, shameless, and lustful in this film. Fathers of the gang who repeatedly raped a young schoolgirl, who has now committed suicide, do not involve the kids’ mothers in the process of concealing this crime, and bribe the mother of the schoolgirl. What fathers want is peace without justice, business as usual, while Mija mourns the girl’s untimely and tragic death and suffers from the consequences of the actions of her beloved grandson Wook. What distinguishes this film from other Korean films with similar subject matters is that Mija’s deep love towards Wook — her favorite thing is to see him being well fed— did not justify her becoming a monster herself. And this is why we owe our sanity to her.
Facts that may help you understand this film better:

• Yun Jeong-hie who plays the protagonist Mija was born as Sohn Mija. Mija was a quite common name for girls who were born before 1980s in Korea but now this name is regarded as old-fashioned.

• The Mija’s poem that was read out first by Mija and then by the voice of the girl who committed suicide, was written by novelist-turned-filmmaker Lee Chang-dong in commemoration of the former Korean president Roh Moo-hyun who committed suicide on 23 May 2009 by jumping from a mountain cliff in the middle of a corruption investigation. Lee served as culture minister under Roh Moo-hyun’s government. Lee is known as one of the most progressive filmmakers in Korea and has on a number of occasions refused to accept his Blue Dragon awards for Best Film and Best Director because this award is sponsored by Chosun Ilbo, a far right-wing Korean newspaper.