The Golem and Me By Mikel Koven

Below is an essay by Dr. Mikel Koven from the Institute of Humanities and Creative Arts at the Universty of Worcester and relates to our sciSCREENing of Der Golem in October.

I appear to be here as a combination of token film studies expert, token folklorist and token Jew; and that’s not an altogether negative position to be in. I’ve had a close relationship with Wegener’s Das Golem for many years now; it has been a film which seems to follow me around. For example, I wrote the short piece on the film in the book 101 Horror Movies You Must See Before You Die, and when I was curating the St. John’s Jewish Film Society, back in Newfoundland, Canada, it was one of the first films I screened. While only tangentially about Wegener’s Expressionist classic, one of my first published articles was on the Golem legends, particularly its manifestation in an episode of The X-Files (‘”Have I Got a Monster for You!”: Some Thoughts on the Golem, The X-Files and the Jewish Horror Movie’ Folklore 111.2(2000): 217-230). So the mud-man of Jewish folklore has been following me around for some time. 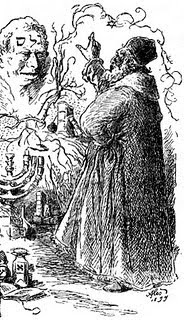 My original proposal for doctoral research was actually on the concept of “the Jewish horror movie”, a good chunk of which would derive explicitly from Jewish folklore. I never wrote that particular thesis, but the idea has never left me, and one of these days hope to actually write that book. So talking about Das Golem is accompanied by a feeling of ‘coming home’.

One of the aspects of this story which has always fascinated me was that it is not simply one story; there is a whole cycle of Golem legends, collected and retold by Chaim Bloch in a collection originally published in German in 1917. A few years earlier, Gustav Meyrink’s expressionist novel, Der Golem (1914), was also published – Meyrink was a compatriot of Kafka’s. So, what’s not to like? It is within this context – of German expressionist literature, art, theatre & cinema, of Jewish folklore collection and Kafka-esque angst – which Wegener’s film needs to be seen.
Posted by Jamie Lewis at 05:15