Representations of Warfare and The Hurt Locker By David Machin

Below is an essay by Dr. David Machin from the Cardiff School of Journalism, Media and Cultural Studies at Cardiff University and relates to our sciSCREENing of The Hurt Locker in May.
As a teacher in the School of Journalism at Cardiff University my first reactions to this film were through my concern for the way that images and representations of warfare serve to either aid or confound the way that the public understands wars, who fights in them, who is harmed by them and why they are fought. With massive financial cuts across news organisations there has been an increased reliance on stock footage and photographs supplied by specialist corporations. These are highly decontextualised and do not record actual moments instead showing soldiers and civilians waiting around or decontextualised burned out buildings. 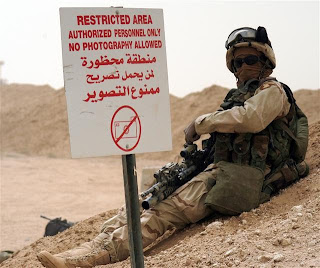 Much reporting has also become highly uncritical of the reasons for war even if there is criticism of the conditions in which 'our boys' fight, and the damage to vulnerable locals, mainly depicted through cliched images of children and mothers. So in the first place I found this film to lack setting or context. For me this is important when it is about war, its nature and consequences. Are we being trained to see the reasons for war as secondary or as unimportant, or for some reason do we not want to know? Some feel films are just fiction. But the most famous propagandists such as Joseph Goebbels pointed out that the public are controlled not through political speeches, but through stories and entertainments media. It is these that are most persuasive and allow ideas to enter their minds unnoticed.
Also the history of war representation in movies and photography shows that these say more about the public and society that produced them than about actual warfare itself at the time, about the ideas and values of those people. What does this movie with its troubled yet ruthless and highly talented hero say about our time, and about us. The 1970s had John Wayne, the 1980s Rambo. Each said something about their time. We would not discuss a child's drawing of a say a man by debating the likely character of the drawing but in terms of what it said about the psychology of the child and the society that had taught it to make such depictions. So while we can discuss the true nature and motives of the characters in Hurt Locker would it not be more relevant to discuss exactly what this depiction says about us and our time?