The Garden sciSCREEN: A Short Summary

Another highly enjoyable evening of stimulating discussion this time focused on the Academy Award winning, ‘The Garden’ was co-ordinated by the Cardiff sciSCREEN team at Chapter Arts Centre on Tuesday night (Nov 9th). The Garden tells the story of one minority group’s struggle to preserve their rights not only to a piece of land but a way of life, threatened by commercial and political avarice. As a hugely emotive and heart-breaking journey that laid plain the corruption and nihilist tendencies of America’s power elite, the film provided ripe material for, an as ever, lively post-mortem discussion. 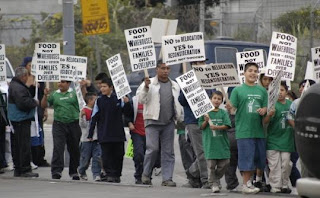 Tied in to Cardiff University’s sustainability week – ‘The Garden’ sciSCREEN was sponsored by the The ESRC Centre for Business Relationships, Accountability, Sustainability and Society (BRASS) and featured one of its own researchers, Dr Diego Vazquez. Other ‘academic’ panellists included Dr Hilary Rogers from the Cardiff School of Biosciences, and Jessica Paddock – a doctoral student from the Cardiff School of Social Sciences and Arthur Getz – a doctoral student from the Cardiff School of City and Regional Planning. The panel was complemented by Steve Garrett – Chair of Riverside Community Market Association. Each of the panellists provided a brief, 5 minute account of their personal readings of the film which reflected their own professional and personal interests and perspectives. This laid the platform for a diverse and animated discussion, chaired by sciSCREEN co-founder, Dr Jamie Lewis.
The 52 strong audience included lots of people with an interest, even passion, for growing their own food – many with their own allotments. Others included community reps or natural/local food campaigners, some with a passing interest and a number of guilty supermarket confessors. Some even came from as far afield as Stroud. Yet again, First Space was kept busy as were some of Canton’s local eateries as conversation spilled out and carried on to the twilight hours.
Written by Dr Richard Watermeyer
Posted by Jamie Lewis at 08:48