Recognising the relationships between donors and their recipients: The missing ‘others’ in Never Let Me Go.

The following is a personal piece written by BD, a member of Cesagen, which relates to our sciSCREENing of Never Let Me Go.

Never Let Me Go followed the lives of a group of ‘donors’ as they carried out their everyday, routine and mundane existence. Whether one thought the film dull or harrowing, it certainly prompted reflection of one’s own mortality and for me this meant thinking about my personal experience of being a recipient of a transplanted organ. From this position, my main criticism of the film was that it ignored any relationship between donor and recipient, and the value that this relationship might have for both parties.
One issue raised during the sciSCREEN discussion was why the children/young adults did not question their fate or attempt to run away (this is explored by Dr Mellor in his commentary on voluntary servitude). The discussion considered the possibilities of social conditioning, drugs that made the donors compliant, isolation and reduced possibilities for collective rebellion. Yet their lack of rebellion might also be explained by their implicit relationships, based on promise and expectation, with the potential recipients.
I was born with Cystic Fibrosis and during my teenage years my health had deteriorated to such an extent that I was on oxygen 24 hours a day and had to be fed through a tube in my stomach. My heart and lung transplant in 1996 (at the age of 23) brought with it a new life and I continued my studies, moved out of my family home and began living independently. Relationships between the recipient and the donor or donor family were not encouraged within my clinic but I was able to make contact, and therefore my experience might be very different to most. I have met and kept in touch with the family of the young boy who lost his life and from whom I received my new heart and lungs, as well as the man who received my own heart.
Although my heart was healthy, the heart and lungs were easier to transplant as a package rather than negotiate the complex web of nerves that links the two. I was therefore involved in a ‘domino transplant’ which meant that as I received my new heart and lungs, my own heart was given to someone else. While I was in theatre, my family began talking to another family in the waiting room whose relative was having a heart transplant. It soon became apparent that this was the wife and two sons of the recipient of my heart. During recuperation, my family brought me news of this stranger’s progress, and when I was well enough to leave my room I went to meet him and we stayed in touch until he passed away 10 years later.
In contrast to the opportunistic meeting with my ‘heart man’, it was my mother who had purposefully sought contact with my donor family in the desire to thank them and to provide them with news of my good health. She was told that she could write an anonymous letter that would be sent to the donor’s family if and when they requested contact. Despite these rules, my mother included her own address and within days had received a response. Through this letter I found out that my donor was a 15 year old boy who had been knocked down while crossing the road on his way to school. His mother sent me a photograph of a handsome and strong boy who was good at sport and had many friends. His mother and father visited some months later, and we even appeared on Richard and Judy together (Judy was ill on the day so Caron Keating took her place).
For a recipient, the relationship between donor or donor family can be extremely difficult. I have known people refuse to have a transplant because they cannot cope with the fact that they might benefit from another person’s death. In fact, very few people I know who have had a transplant have met their donor families or even know anything about their donor. Every milestone, such as surviving the first month and celebrating the first, fifth and tenth years, were a reminder of the different fortunes of our two families, yet the contact with my donor family has been really important in making sense of my new life. If a transplant is considered a ‘gift’ (Richard Titmus, 1970) then for my family and I it was important to say thank you. 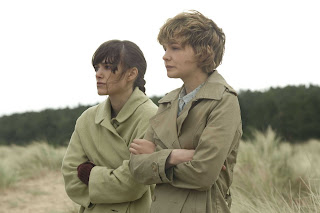 Developments in medical technology might lead to an increasingly significant relationship between donor and recipient. Saviour siblings (where embryos are selected to be a genetically identical match for an ill child) and living donors (where relatives or even strangers might agree to donate an organ such as a kidney or part of their lung) have the potential to transform existing relationships. Yet the invisibility of the donor recipients in this film is not surprising. Never Let Me Go could be characterised by a distinct lack of ‘others’. Hospital wards were empty, the bleak countryside was unpopulated and even a normally bustling sea front appeared deserted. While this served to emphasise the isolation felt by this group, an opportunity to explore this unique relationship has, in my opinion, been missed.
Posted by AndyB at 03:51