District 9: Prawns, Pests and Matter out of Place

The following is an essay written by Jamie Lewis and relates to the District 9 sciSCREEN.

District 9 (2009) is a science fiction film that in many ways is less about an imagined future and is more a social commentary on the here and now. There is no doubt that the film is an allegory for racism, ethnicity, South African Apartheid and, perhaps more widely, xenophobia. To this end, District 9 has some connections to the film Planet of the Apes (1968) which has also been described as an allegory for racism and arms-warfare (although this has been criticised in other quarters).  Weapons, along with social and class politics, as well as other worlds are also central themes in Blomkamp’s most recent film Elysium (2013). In Elysium, humans have built and colonised an artificial ‘planet’ in space, which can be seen from Earth.  In District 9, however, the aliens, colloquially known by the derogatory name ‘prawns’, have presumably come from space to Earth. It is this concept of the ‘alien’ in District 9 that I discuss in this short essay.

First let us compare the alien in this film with another film around the same time – Avatar (2009).  In both District 9 (Wikus van der Merwe) and Avatar (Jake Sully) the central character in the film is a human who becomes an ‘alien’. It is, however, arguably easier to empathise with those blue, sentient creatures from Avatar, as they were beautiful, idealised, moral beings. District 9 makes the audience worker harder to sympathise. The aliens are far from beautiful. In fact, they are meant to disgust, and for the most part, unlike Avatar, we don’t see them as morally superior. Indeed, in large parts of the film, they are presented as grotesque savages and scavengers. All the same, we do have to empathise with them as victims. Accordingly, District 9 is much more politically powerful than Avatar – as what keeps us treating other people humanely isn’t tested by treating people that we admire with dignity (Na’vi), but treating people we don’t understand with the same level dignity (Prawns). Thus, despite the film’s central characters being from a faraway world, its central concept is about something very human – the film is a commentary on humanity and inhumanity.

The setting for District 9 is Johannesburg, a place not only home to the prawns of District 9 but also in real life the ‘parktown prawn’ – a six-legged, cold-blooded insect with feelers on top of its head and underneath its jaw. These creatures can grow up to 10 cm masticating their way through a diet of snails, slugs and vegetation. Indeed, the parktown prawn is the inspiration behind the look of the District 9 prawn explaining their grotesque insect like features. Other resemblances between District 9’s prawn and the parktown prawn include the parktown prawn’s tendency to discharge a blob of noxious black sludge, and a penchant for cat and dog food as well as garden pests.

Unfortunately for the residents of Johannesberg, the parktown prawn’s eating habits don’t end there. Parktown prawns also feed on floor boards, furniture and rugs. Thus, they may be a friend for the gardener but they are certainly a pest for the household dweller. Mary Douglas is important here if we are to unpack the symbolism behind the District 9 prawn. Douglas was a British social anthropologist best known for her work on human culture, rituals and symbolism. The ‘home’ for Mary Douglas was less a particular space and more a place brought under control (Fudge, 2011). For the most part, parktown prawns become a ‘pest’ when they are out of place. In the garden, they can be conceived as a friend of the South African greenkeeper, ridding the garden of unwanted gastropoda. In the house they are deemed a pest; invading the home, munching their way through furnishings, damaging property and ultimately making the place untidy or ‘dirty’.

Douglas’ seminal work first published in Purity and Danger: An Analysis of Concepts of Pollution and Taboo (1966) traces the word and meaning of ‘dirt’. Pollution or dirt, she argues is the consequence of ‘matter being out of place’. An example would be bodily fluids, important to the internal workings of one's body, but which on leaving the body become seen as filthy and dangerous. In a similar vein, the prawns of District 9 are also out of place. The following extract is part of a conversation between Christopher Johnson – one of the alien ship’s officers – and his young son. 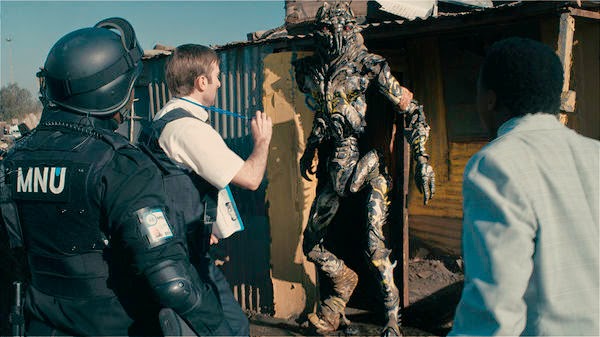 As much as the film’s message is about difference and tolerance, it is also about the aliens’ attempts – as E.T. (1982) might put it – 'to go home'.  At best, the prawns are viewed as ‘pests’ by the humans as they have inhabited their world. This, of course, is why Wikus’ is tasked with overseeing the mass eviction of the alien prawns from the town to a huge camp out-of-town. Unlike the parktown prawn though they do more than infest the home, they overrun the structures of social order and social categorisation as well. It is only when Wikus begins metamorphosing into a prawn himself does he begin to understand these beings and begin to understand that social categories of place, space, home and alien are malleable, constantly shifting and, most importantly, socially generated. During his metamorphosis, and of possible interest to Douglas, Wikus also begins to see the humans with their powerful weaponry and interest in acquiring the alien weaponry as more dangerous than the prawns. Just as the parktown prawn is mischaracterised as a prawn (they are actually king crickets), Wikus, realises he has mischaracterised the District 9 aliens. They are more than bottomfeeders- they too have a society, and they too have families. Most importantly, they too have homes, and the slums they are forced to inhabit on earth are not brought under control enough for the prawns' liking so as to  appropriately function as a new 'home'.
Posted by Jamie Lewis at 05:29