Dr Jon Anderson is a Senior Lecturer in Human Geography at the School of Planning & Geography, Cardiff University. For more on Jon’s work please visit www.spatialmanifesto.com

TS Eliot said it is the instinct of every living thing to persist in its own being. Not just humans or animals or insects or viruses, but all living things; and from the example of ‘Moon’, we can perhaps say that Eliot’s assertion also includes clones.

And if we think about it, why wouldn’t Eliot’s assertion include clones too? As the example of the Sam Bells suggest, clones are living beings, and each seeks to realise themselves. If we accept this, then we may ask what does it matter how they were conceived or the nature of their origin? We can think about this not simply in terms of clones in ‘Moon’, replicants in ‘Blade Runner’, or fabricants in David Mitchell’s ‘Cloud Atlas’, but also in terms of ourselves in terms of how we are, to some extent or other, clones of our parents (for example) – to what extent are we original in any real sense? 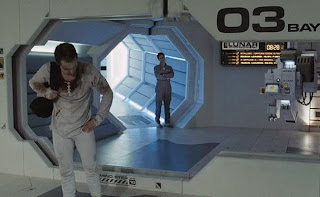 What we do have in common with Sam Bell (and Chesney Hawkes as is alarm clock reminds him on a daily basis) is the assumption we are unique, we are ‘the one and only’, and we are the centre of our own universe. As a consequence of this, we rebel against the sense that we are simply cogs in someone else’s machine, we don’t want to be ‘told what to do’ (as one version of Sam tells the other), we want autonomy. And whilst we don’t want to be owned, we still want to belong, and we want to determine the nature of that belonging ourselves. Without that, the film suggests the lengths we all go to realise our own being, and our own ending. From sabotaging our world, to opening up the cracks and vacancies in any systems of power, even to going off reservation in order to find new life and new forms of communication.

‘Moon’ therefore tells us something about alienation and how we as humans treat each other and other living things. What do we learn from different phases, ages, or reboots? What will the new Sam Bell learn from his past? Does society simply reboot itself without learning lessons of the past? If we displace ourselves to the Moon, will we continue with the same power relations, exploitation and alienation as we currently do on Earth? The film prompts us to ask these questions as Sam arrives back on Earth. Will he be reduced to ‘either a wacko or an illegal immigrant’ or simply as Eliot would suggest, another (rather than an Other) living being seeking to persist in its own being? For me, the film suggests the hopeful conclusion that we will always rebel against corporations and institutions that may seek to overly determination our autonomy, but also with a worrying sense that we all easily reboot and forget that clones, or any type of non-orthodox being, is somehow less than us because it is not-us.