Left Out in the Wild? Floods in a Changing Climate by Catherine Butler

Below is an essay from Dr Catherine Butler from the School of Psychology, Cardiff University.

Climate change is very often characterised either explicitly or implicitly as a future issue – one that is temporally distant, the implications of which will be felt at some unspecified time often assumed as being in the long term future. The effects of climate change are, however, for some of us already being felt, both in a direct sense – people are experiencing climate related events like floods – or in more indirect ways – through changes that arise with attempts to respond to anticipated futures.

In Beasts of the Southern Wild, we find a world in which the flood waters have come upon Hushpuppy (a young girl), her father (Wink) and their small community within ‘the bathtub’ – an area created by a sprawling levee. Though the melting icecaps portrayed in the film are suggestive of its location in a future time, the world depicted is very much one that resonates with current realities for people around the world. In many respects, then, the film offers an opening for thinking about contemporary UK policy around flooding and climate change.

In the world that is invoked through the film, we find notions of anticipation and preparedness for futures. These are delivered to us through Hushpuppy’s teacher’s call to her pupils to “learn how to survive” and be ready for what is to come, and through the knowledge that the community sits outside of the levee built to protect those inside from the flood waters. We thus find that there has long been an expectation for a flood and that efforts have been made (both by those in the bathtub and those behind the levee) to prepare for the future.

Similarly, in contemporary UK flood policy we find efforts to anticipate and prepare for floods. This involves moves to incorporate in decision-making scientific knowledge of climate change and the implications of this knowledge for flooding, i.e. floods are growing in intensity and frequency and are expected to continue to do so into the future. This recognition has resulted for some in a problematising of flood defences as notions of building ever higher walls are called into question. One response to this problematisation has been the suggestion that instead of continuing to defend against floods, moves should be made to ‘make space for water’ and engender acceptance of floods as part of life.
This policy approach encompasses a wide range of proposed measures, including reducing development on flood plains, retrofitting of properties to make them more resilient to flooding, or installing household level flood protection measures. Despite these moves within flood policy, flood defences of the sort depicted in the film, remain key to flood policy and management in the UK. This continuation of flood defence, alongside notions of accepting and living with floods, raises questions regarding “who” has to make space for water and “who” gets protected from floods. The answer to these questions relates closely to the particular approach being taken to think about the future.

The wider policy context is allied with ways of thinking about and understanding the future primarily in terms of ‘risk’.  Risk assessment represents a common way of attempting to anticipate and guard against future disasters. Risk assessment techniques generally involve a calculation of probability (how likely is an event to happen) and consequences (how significant are the consequences – though some efforts are made to incorporate more social and environmental criteria, this is generally assessed in economic terms). 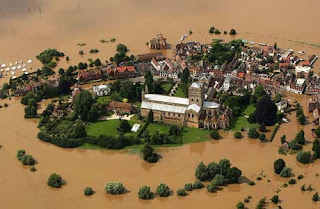 A key use of the knowledge derived from risk assessments is to take decisions about where to allocate money for flood defence schemes (both for new and maintenance of existing schemes). In the UK, first in line for flood defences are those at highest risk but only when this combines with highest consequences. Because of an emphasis on economic calculations of consequences, the areas where most will be lost in economic terms are those that receive financing for flood defences. This focus on economic consequences is, in large part, driven by the strong imperative that exists to maintain what is known as “the gentleman’s agreement” between state and insurance companies– an agreement whereby government finances flood defences and insurance companies compensate for flood damages. It is worth noting that this contrasts with approaches in most other countries where public, rather than private, insurance is the norm.

A perverse outcome of this way of assessing where to allocate flood defences is that certain places and people get protected (generally those more economically costly if flooded), while others are left, as with the community in the film, outside of the levee. For those of us left outside “in the wild”, we are exhorted to learn to live with floods, to take on responsibility for protecting ourselves, and to make space for water. This is not to be entirely critical of this approach – this is a difficult area in which to govern because there are no easy or straight forward answers and maintaining the gentlemen’s agreement, so that insurance remains available for those at risk of flood, is undoubtedly important. But this emphasis on maintaining the agreement does bring a focus on economics and a neglect of the other dimensions of flood beyond financial costs.

One approach (currently being undertaken for some coastal areas in Norfolk) is for the abandonment of some properties and places where defences cannot be (economically) justified. In examining people’s experience of these processes we find an illustration of the difficulties associated with thinking in terms of economics – that is, it facilitates a neglect of the clear importance of the connections people hold to the places and homes in which they live that make the idea of giving up space to floods almost impossible for many of us to embrace. We find this difficulty reflected in the film’s narrative with the desire of Wink to return to his home ‘in the bathtub’ after being taken behind the levee. The film’s depiction of Wink’s, and eventually Hushpuppy’s, return to their home highlights the significance of connections to place, as well as differences in perspective regarding the value we place on things. It redirects us to think about such connections, perspectives and values as important considerations in the efforts to respond to anticipated futures. These aspects of importance in understanding the impacts of flooding are often lost in contemporary policy debates and in processes of decision-making through the lens of risk assessment.

An alternative idea that has gained increasing popularity in the context of increasing flood events and a division between those that will be protected and those that will not, is the notion of increasing resilience. Though the concept of resilience takes many different forms, a typical definition is ‘the capacity of a system to absorb disturbance and reorganise while undergoing change, so as to still retain essentially the same function, structure and feedbacks’ (Walker and Salt, 2006, p.32). This idea has been applied to social systems and particularly to thinking about communities as the focus for engendering greater resilience. Those of us that are not to be protected from floods and find ourselves outside of the levee have to become resilient and adapt to our changing environment but those within defence schemes remain static, continuing as before. This seeming clash between ideas of accepting and being resilient flooding, and the continuation of defence for some raises difficult justice questions – particularly because of the role that economics plays in the decision-making process. As in the film, ultimately, some will be protected by defences, while others will be left out in the wild to find their own ways to survive in a changing world.