What is the Word - Andrew Edgar

In the early 1990s, the Hungarian composer Gyorgy Kurtag wrote ‘Samuel Beckett: What is the Word?’ This is a setting of Beckett’s last poem (initially with piano accompaniment, and later expanded for reciter, soprano, choir and small orchestra). The circumstances of the production of this piece are remarkable, and perhaps doubly so. They expose much about the nature and purpose of art and poetry in the face of suffering and the loss of articulacy.

The poem is composed of 53 short lines mediating on the nature of language, and the struggle to go beyond mere gestures (‘here’, ‘this’, ‘where’, ‘what’) to ‘glimpse’ something. The poem was written when Beckett was himself seriously ill and recovering from having fallen into a coma. It confronts his own inevitable silence, not merely through death, but through the loss of language. Kurtag was inspired to set this poem for the actress lldikó Monyók. A car accident had left her unable to speak for seven years. As much through the force of her own will as anything else, she recovered sufficiently to perform on stage again. Kurtag initially asked her to perform two of his existing songs. He was, he records, ‘fascinated most of all by her silences, which were full of tension’. He then set the Beckett text. In effect, Monyók performs herself on stage, while the music struggles to find coherent questions and answers in Beckett’s fragmentary lines.

Chang-dong Lee’s Poetry seems to be confronting similar issues. Art and poetry are something to which we might turn in moments of crisis. The Gideon Bibles that we find in hotel rooms contain useful advice on which passage one might read if feeling certain emotions; loneliness, despair, grief and so on (with presumably more cheerful emotions also being covered, although I don’t seem to recall them). This quiet advocacy says something very important about the role of art and poetry in our lives. Poems have long served to externalise our emotions, allowing us to see them afresh and bring them under control. We can share our experiences with others, overcoming our isolation and hopelessness. Poetry gives meaning to the apparent chaos of our lives. But some experiences seem to be too extreme for poetry. There are crises that seem to be beyond it, for there is no meaning to be had. The mortal illness of a poet, the muteness of an actress, and for any of us the onset of Alzheimer’s disease and the confrontation with family crises, all seem to strike at the very ground of our being. For Beckett to ask (if indeed he is asking) ‘what is the word?’, is in effect to ask how one can go on when the very conditions that make you the person you thought you were have been swept away. Nothing any longer makes sense.

Beckett, lldikó Monyók, and Mi-ja continue to write and perform, or indeed to begin to write for the first time, in the face of such crises. They go on, but perhaps not seeking meaning. Rather they explore the very loss of meaning. Here is the difficulty and complexity of much modern art, but also the disturbing gesture of a lyric poem, celebrating the beauty of a tree or the falling rain, while poignantly and deliberately remaining silent about all that sufferings. One can no longer assume that the world has meaning and beauty. There is a hint of this already in Michelangelo’s Pietas. Michelangelo’s first great work is the Pieta of 1499, that stands in the Vatican. 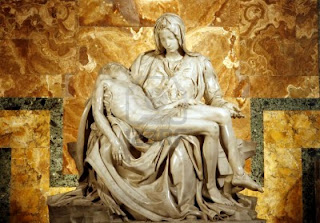 The work is beautiful, and yet there is something wrong. The mother mourns her son with a grace and dignity that is quite inappropriate to what has happened. Mothers should not mourn their sons. There is an injustice here that the very beauty of the sculpture seems to by-pass, or to reconcile all to easily. Michelangelo’s later Pietas respond to this problem. 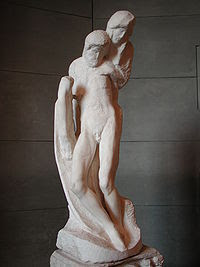 They become more angular and awkward. The body of Christ no longer lies graceful across Mary’s lap. It hangs or is held, a dead weight. The supporting figures become increasingly twisted, agonised. Ultimately, the final work is left unfinished, as if the artist is defeated by the very weight of grief and suffering. Just as Beckett struggles to find a word and Monyók to utter a phrase, so Michelangelo struggles to find the next appropriate blow of his chisel. The mute stone, like Beckett and Kurtag’s hesitations, refuses to pretend that there is always meaning in the face of suffering.