Stammering and The King's Speech By Calum Delaney

The following is an essay written by Calum Delaney from the Speech and Language Therapy at UWIC and relates to our sciSCREENing of The King's Speech last night.
The film illustrates that there’s just so far you can go with silence, before people start to feel awkward. This seems to be one of the dominant features of stammering, certainly as presented in the film. It is unlike many other disorders of communication where there is typically something going on that the listener is able to work with. In trying to understand the communication disruption of stuttering, it is probably useful to consider the experience of the listener as well as that of the person who stammers.

The listener’s response in an initial encounter with a dysfluent person is often one of surprise – “what’s going on?” “what should I do?” The listener’s expectations have been violated. The normal pacing of the listener’s non-verbal responses (eye-gaze, facial expression, gesture) is disrupted, often leaving both floundering in the silence. Once aware of the likelihood of disruption, other responses emerge – irritation, impatience, embarrassment. Both speaker and listener are conscious of being trapped into an encounter in which both parties have a diminished ability to control its course. Both are dominated by the stammer. It is this communication dynamic that is repeatedly portrayed in the film. In this case it is further complicated by the social roles of the speaker and listeners. The Duke of York has fewer of the options open to most stammerers for avoiding or otherwise managing difficult communication encounters. Most of his listeners are equally constrained in the options available to them for managing their own sense of awkwardness.

How should we understand the dysfluent speech behaviour produced by people who stutter? Most speech and language therapists would make a distinction between core and secondary behaviours. Core behaviours are the very rapid and often momentary interruptions in the flow of speech that most people identify as stammering. They are generally thought of as involuntary and to arise from some sort of physiological or organic cause. They are usually differentiated into repetitions, prolongations and blocks, and these may be located at one or more of the levels of respiration, phonation and articulation. Repetitions, prolongations and blocks are also thought to be representative of increasing degrees of stammering severity. In the film the speech of the Duke of York tended towards the severe end of this continuum.

There is a third aspect of stuttering that contributes to the difficulties that a dysfluent person experiences. This is the feelings and attitudes that accompany the stammer and are bound up with it. This dimension of the stutterer’s experience was consistently portrayed throughout the film. Dysfluent speech can give rise to feelings such as frustration, embarrassment and hostility and negative attitudes towards individuals, situations and personal aspirations. Anticipatory feelings of anxiety and fear, and expectations of difficulty and negative reactions, can also precipitate or exacerbate dysfluent speech moments. It is often difficult to disentangle the causal relationships between these, and it is often this aspect of the stammerer’s experience of her difficulty that is the most salient. Even when she is being fluent, the person who stutters will often still see her communication as being dominated by the fact that she is dysfluent, or a “stammerer”.

Modern speech and language therapy is often directed towards each of these three components of stammering in a fairly systematic way. The focus of the intervention would reflect the weighting of the components in the overall presentation of behaviours and responses. The interventions would also be more directly related to the nature of the presenting behaviours and theoretical understandings of how these are constituted. Core behaviours, which are probably the least responsive to intervention, would be addressed through attempts to modify the ways in which the dysfluent speaker breathes, initiates and maintains vocalisation and executes articulatory movements. It was this aspect of management that was mostly portrayed in the earlier stages of the film. However, these techniques were implemented fairly randomly with little consideration being given to the presenting behaviours. The influence of these techniques in the film may be explained by what is referred to as the “distraction effect” – stuttering behaviour can often be reduced by anything which alters the way in which the dysfluent individual speaks. The effect can be variable though, and it is seldom long-lasting. Secondary behaviours are typically managed using classical and operant conditioning techniques to reduce or eliminate them. The focus of attitude modification is to explore alternative and possibly more helpful ways of viewing and responding to the stutter and also more broadly to communication, interaction and self-perception. In the later stages of the film it was this aspect of the king’s difficulty that began to be explored in the relationship between him and Lionel Logue. 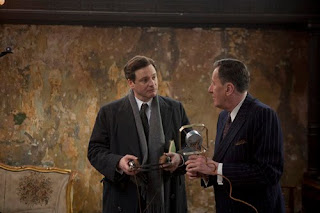 The film showed that, in the case of the king (and often with many people who stammer) dysfluency is not always something that can be made to go away. It is a part of the individual, it is variable, and it is (sometimes unpredictably) influenced by multiple interacting factors. Fluency requires maintenance. It is hard work. It demands resilience and persistence. But that may be to give stuttering more attention than it is due. George VI was more than his stutter and most of the characters saw this, especially his therapist. People who stutter are similar to everyone else, beset with fears and anxieties and possessing varying capabilities with which to manage them. They also possess the same degree of insight and wit in recognising and responding to these in themselves and others. They just speak a little differently.