Medicine, Sensation and the 'Wolfman' By Keir Waddington

Below is an essay by Dr. Keir Waddington from the Cardiff School of History, Archaeology and Religion at Cardiff University and relates to our sciSCREENing of The Wolfman in March.

The ‘Wolfman’ plays on themes that would have been familiar to audiences in the late-nineteenth century when the events of the film are set. Film itself was beginning to make an appearance as an exciting new technology and although representations of the Victorians like to show them as stiff, repressed and controlled, contemporaries were fascinated by spectacle, sensation, horror and the macabre; a fascination that can be best described as the ‘attraction of repulsion’. But it is not just the gothic dimension of the Wolfman that would have been familiar. The film contains motifs that would have had a resonance with concerns current in late-Victorian medicine. 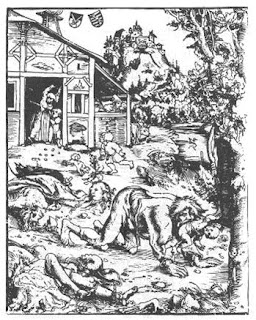 The idea of the lunatic raving at the moon had been established long before the nineteenth century, while representations of insanity as somehow bestial were a central feature of early modern interpretations of madness. Although Victorian psychiatry moved away from these interpretations as definitions of madness were refined to cover a wide range of behaviours, at a popular level notions of the moon and lunacy and of raving maniacs were common, and featured in newspapers and sensation fiction. Of course, the film’s dark representations of the asylum say more about our notions of the Victorian asylum than the nature of these institutions, but fears of wrongful confinement, brutal treatments and the power of doctors over patients were current in the 1890s and were not limited to penny dreadful or sensational journalism. Institutionalisation in an asylum was generally used as a last resort for the dangerous and violent, those individuals whom families, friends and communities could no longer deal with. Although the image of chains, electric shocks and immersion in ice-cold water in the film owes more to eighteenth-century responses to mental illness, hot and cold showers and the resort to various drugs to calm patients were being widely used in the late-nineteenth century, while there was intense contemporary debate about the utility of physical and chemical restraint.

The period also saw the emergence of different ways of conceiving mental illness as new ideas about neurology and neuropathology were put forward, ideas that found expression in debates about the nature of delusions and functional nervous disorders like hysteria. In Paris, Charcot was investigating such ideas and it is him, rather than the films allusions to Freud, that the closest parallels exist, even in terms of how Charcot presented his cases to his fellow doctors. It is here that the film might have a further resonance with contemporary medical concerns - a necessary background to these changing conceptions of mental illness were debates about degeneration and hereditary, the idea that disease or ‘taints’ existed in families, while the theme of the curse was a familiar one to contemporary novels. Alarm about degeneration and hereditary permeated a wide range of disciplines from psychiatry and medicine to social investigations and anthropology and reflected the socio-political pessimism of the period as well as concerns about the feared decline of middle-class fertility, the nation, race and empire.

Other currents in Victorian medicine can be seen – the film plays with ideas of contagion and the blood. We are of course familiar with these ideas from Stoker’s Dracula, but concerns about the nature of contagion, infective agents and germs were being hotly debated in medicine at the time, especially in an imperial context where attention focused on parasites and the native population as a reservoir of infection. At another level, attention was being directed at the nature of the infective agent in rabies and possibilities of a cure, especially following Pasteur’s work in Paris. Stories of wild, rabid dogs featured in newspapers, and the figure of the Wolfman infected with a foreign agent would have struck a chord with late Victorian audiences.

And finally, contemporaries would also have been familiar not only with Inspector Aberline following his role in investigating the Whitechapel murders, but also with debates about the effectiveness of the police, the role of detectives, and the need for vigilantes. The detective was a new breed of policemen at the time, while the Ripper murders focused attention on the powers of police, building on existing concerns about their role and fears of urban crime. A sense that the police were incompetent, that the city was a dark and dangerous place, had seen the creation of vigilante groups in London’s East End in 1888, who, like the villagers in the film, tried to take the law into their own hands and trap the monster.

Of course, it is important to remember that the film is a representation of how we see the late-nineteenth century. However, in terms of some of the ideas, and even in some of the shots which have a similarity with Dore’s images of London, the film would have had a resonance with late-nineteenth century audiences, and given their fascination with the gothic and sensation they, like us, would probably have flocked to see the film.
Posted by Jamie Lewis at 08:22