Lingering on Pink and the Suspension of Disbelief

The following essay is written by the Artist - Julia Thomas - and relates to the Cardiff sciSCREEN discussing  the film Lars and the Real Girl.

I'm going to draw on some significant visual aspects within the film Lars andthe Real Girl and also relate the film to an art project and gallery space that I've been running in Roath, Cardiff. ATTIC involved art residencies, exhibitions, discussions and events exploring how we understand the mind personally, culturally and scientifically.

‘Lars and the Real Girl’ is a film about loss, attachment and abandonment, loneliness, compassion, acceptance and connecting but principally it’s about community and a collective compassion by that community towards an individual. Our understanding and experience of life comes about through our own personal encounters with the world but also with how we communicate with others and how we share those encounters with others through language, both verbal and visual. When I use the word language, I mean words, sounds, marks or signs that hold meaning.

Although there are other examples in the film, I’m going to draw on a particular visual reference - the colour pink, which I found interesting both in its use as a signifier and as a means of composition to guide us through the narrative of what Lars is experiencing. Early on in the film Lars’ lack of a girlfriend is highlighted by his church friend Mrs. Gruner when she gives him a pink carnation and tells him to give it to someone nice.  However, when Margo awkwardly steps forward as someone who could potentially fulfill that role, there is that very comical moment as Lars hurriedly throws the carnation to the floor and runs away as fast as he can. This instantly sets up the framework of the film to be about connecting (or not) with others and within the backdrop of community life.

Most likely triggered by Karin’s impending childbirth, Lars’ delusion of Bianca develops with humour and sensitivity throughout the film; he treats her as a real person with whom he can share his anxieties and use as a tool to enable him to confidently share his concerns with others. The pink bedroom features heavily and this, of course, was his mother’s bedroom who died whilst giving birth to Lars. Thus the pink comes to represent his mother’s lingering presence in the family home but also her absence in Lars’ life. Many of the conversations between Lars and Bianca, the anatomically correct sex doll that becomes his girlfriend, take place within this pink bedroom. 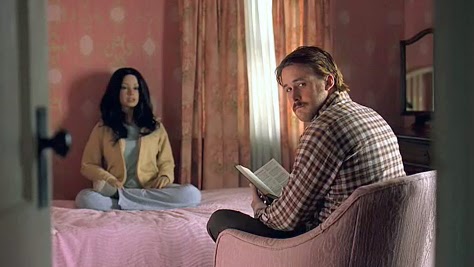 When Lars’ relationship with Bianca begins to falter he goes bowling with Margo and again we see the significance of the colour pink when the filmmakers linger on a moment in which Lars is reluctant to let go of the bowling ball, the pink bowling ball. This can be read as the letting go of the disconnected life he has constructed to protect himself or is simply familiar with, possibly as a result of his upbringing by a father saddened and incapacitated by grief and loss. Finally, towards the end of the film, Lars prominently wears a pink carnation in his lapel at Bianca’s funeral.

Within artworks there is often less of an obvious narrative than within films but the use of colour, media, composition, signifiers and different modes of presentation or experiencing the work make up a visual language that may confer intended meaning or, more interestingly, open up the opportunity for the viewer to develop their own reading and meaning of the work through what they bring of themselves and their own experiences.

There are other aspects of the film I picked up on, many of which are particularly relevant to the ethos and concept of ATTIC and to the activities that have taken place there. The anatomically correct sex-doll, although perfectly acceptable to Lars, is not initially considered to be acceptable behaviour in the eyes of the community, especially the church members or parents of young children. Contrast that with the act of a socially acceptable form of greeting, the handshake. The handshake is highlighted in the film by the difficulties Lars has with physical contact and his obvious discomfort and pain of that process. Mores is a word used to define the accepted (moral) conventions of a group or society so it is interesting how the film plays with those perspectives and, indeed, plays with us as viewers of the film by presenting us with a seemingly unrealistic scenario of a community that later accepts Bianca as a ‘real girl’. Perhaps such ‘obvious’ unrealism simply echoes the schism that exists between real life and fantasy within Lars’ delusion and allows us to consider what we might achieve if we suspend our disbeliefs and conventions and open up to another perspective?
A comical moment in the film is when the pregnant Karin wrestles Lars to the ground in her frustration at being unable to connect with him and to cope with his increasingly evasive behavior. This takes place in the space between the family home and the garage where Lars has been displaced. Such negotiation of ‘the private and the public’ raises issues of safe territory and of how difficult it can be for a person to deal with other’s lack of understanding and distress.

Another trope in the film is ‘conversation through the act of making’; the church ladies ‘sit’ with Lars whilst Bianca is ill and they tackle the sensitive conversation of what her illness represents, all whilst in the act of knitting or embroidery. A creative/visual framework, conversation through creating/making, the bringing together of different perspectives, questioning the accepted conventions of different groups in society and the negotiation of the private and the public are all features of ATTIC and what it has been exploring. There is soon to be a short documentary film about the project but you can see some of the activity that took place by searching on facebook.com/cardiffATTIC.