Lars and the Real Girl: Mental Health, Communities and Stigma

The following essay is written by Dr. Martin O Neill from the Cardiff School of Social Sciences and relates to a showing of Lars and the Real Girl at last month's sciSCREEN.


I was recently asked to give a talk on mental health and community as part of the Cardiff sciSCREEN initiative.  following a showing of the film “Lars and the Real Girl”. This is a charming little film which recounts the tale of a social misfit in small town North American town who appears to compensate for his loneliness and social ineptitude by forming the delusion that he is in a “Girlfriend Experience” with a life like sex doll, which he names Bianca. As a story and as a modern morality tale this is a film that will take you through the whole gamut of emotions, and purely for its entertainment value I would thoroughly recommend you give it a watch.

I had been asked to give this talk after the screening in light of the fact that I have quite a long history of working in poor communities in the South Wales valleys that suffer severe health issues both of the physical and psychological nature.  I started the talk by recounting a recent conversation I had had with a physician who had worked with the late great Archie Cochrane. One of Archie’s most famous pieces of work consisted of a study of the Rhondda Fach conducted in the 1950s. During this conversation the physician recounted how, at that time, the main health problems communities faced concerned pneumoconiosis, TB  and other respiratory diseases related to the mining industry and smoking. “Of course” he said “I am sure if we were doing the study today we would find mental health issues would be the main problem”. I had to agree whole heartedly.  The experience gained from working in the area for over 10 years has meant I know only too well that following the demise of the heavy industries, that had once been not only the raison d’etre of these communities but also the cause of the respiratory illnesses that blighted them, has left an emptiness and anomie where mental health issues have impacted on the lives of many.

Although in many ways this film is certainly a feel good one, the way that Lars’ family respond to his delusion is typical of the way many families react when one of their relatives is affected by mental health issues. Denial, blame, guilt, trying to talk “sense” to the individual, a sense of powerlessness are all common responses to something that understandably people find very distressing when it impacts on a loved one. Often the treatment or care that is available in such areas, particularly for people suffering quite low level psychological problems such as mild depression, is poor and may even appear to exacerbate the situation. The high levels of medication prescribed in the community does little to address the underlying problems and provides no real solution and can be seen as contributing to developing a population dependent on such “happy pills”.

Mental health, unlike many other health conditions is often associated with stigma. If you recount to friends you are unable to attend a function or go to work because you have a migraine it does not have anywhere near the same connotations as if you say it is because you have depression for which you are receiving treatment. One of the central features of the plot of Lars and the Real Girl is how the community react to and, ultimately, accept Lars and his delusion. Here I think is a very useful message in relation to how we view mental illness and its treatment.  Early on when Lars’ family take him to the local doctor to be “cured” of his delusion, the doctor asks the family “Is he functional, can he wash himself, dress himself and get himself to work?” To which the family reply that he can.  “Well then” the doctor replies “let’s just go with it”. As the doctor also points out Lars is not in any distress nor is he a danger to himself or others. As was explored in the discussion that followed the screening this would probably not be considered acceptable practice by a healthcare professional under the current models of treatment. 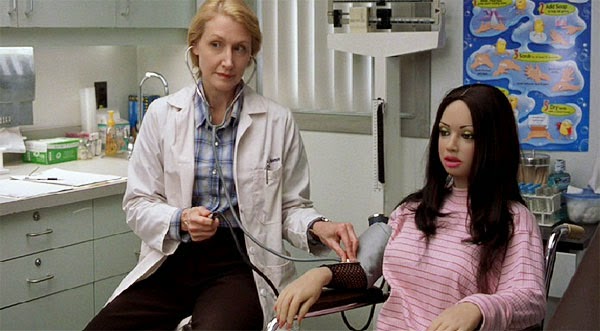 Mental health issues are a reality for many people and many communities.  A statistic often quoted in the media is that one in three of us will experience some sort of mental health issue in our lifetime. Although the veracity of that statistic is somewhat questionable there is no doubt that mental health is a very real concern for many individuals and society in general. How should society and community deal with such an issue? Should we stigmatise it, pathologise it and medicate it as we currently appear to do with little affect? Mental illness can and does lead to great distress and pain, not just for those who experience it but also for their families and the wider community, and at times like that people certainly do need help.  It is also probably true however we all, in one way or another, delude ourselves at times to make life more tolerable. It could be, as we see in the conclusion to the film, that accepting a certain amount of oddness or delusion, particularly if it is harming no one, is no bad thing for both the individual and the wider community.