Memory and Identity in Robot and Frank

The following is an essay by Dr. Alex Hillman and relates to the sciSCREEN following a discussion of Robot and Frank.

A major point of interest for medical sociologists is the relationship between public understandings of illness and disease and the wider cultural preoccupations of our society.  Memory problems and cognitive impairment in later life represent two of contemporary western societies’ biggest anxieties: old age and mental illness.  Often representations of illnesses in popular culture, politics and the media can tell us more about the society we live in than the nature of the disease itself.  Accounts of Alzheimer’s disease and dementia, particularly from politicians and in the national press, tend to evoke quite frightening images.  One particularly powerful and prominent image of dementia is that it is a kind of living death for its sufferers; the body remains but the person is lost.  The language of loss and determinism also shape descriptions of the growing incidents of Alzheimer’s disease and dementia amongst populations, referring to the rising tide of dementia that is suggestive of an unstoppable force that is out of our control.   Smaller, personal stories that attempt to shed light on the experience of dementia tend to focus on the extremes of the disease, making dementia freakish, something that happens to ‘them’ rather than ‘us’.  These stories also tend to take an outside view, highlighting the oddities of those with dementia and witnessing their condition as something alien.

The film Robot and Frank does something quite different by enabling us to experience the world through Frank’s eyes.   Frank’s mistakes tend to derive from him being out of time.  For example, for Frank, his son Hunter is still at Princeton and not the grown up man with a family of his own that he is presented with.   But, we, the audience, are taken into Frank’s world so that his failures or lapses in memory are only made noticeable to us through the responses of the people around him and the physical environment that forces him to rethink his own perception.

The problems experienced by Frank are in a sense indicative of a fraying society in which the provision of care to an increasingly aged population is problematic.  The introduction of Robot into the film is a response to the big question facing western societies:  how do we provide care for vulnerable older people?  In societies that celebrate and reward independence and autonomy, and where families are becoming increasingly fragmented, how do we meet the needs of people like Frank?   The film portrays Robot as a futuristic solution to this societal problem.  However we need not look to the future to see the growing significance of technology as a potential solution to the challenges of an ageing population.  Growing numbers of telemedicine programmes and the development of so called ‘smart homes’ that protect independent living are just two current examples.

The relationship between the robot and Frank and the extent to which the robot is and can provide care is interesting.  It is somewhat ambiguous in the film as to whether Frank’s spiral into criminality is good or bad.  What the film does show is how the practices and activities that made up that criminal activity, such as picking a lock or ‘casing’ a building or reading and interpreting building plans, allow Frank to find part of his identity.  It is in carrying out these physical tasks that Frank recalls aspects of his past life and relationships and where we get the greatest sense of who he was and is. 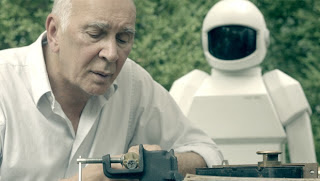 There are some existential questions raised through the relationship between Frank and the robot about memory, identity and humanity: what is it that makes us human?  It brought to mind a poem by Tony Harrison about the nature of identity and its relationship to memory in which he writes: “If we are what we remember, what are they who don’t have memories as we have ours”.  There are two key moments in the film that speak to this very question.  The first moment is when Frank argues against that robot’s suggestion of wiping its memory and at the end of the film when Frank eventually turns the robot off.  These two moments suggest an interesting contrast between the robot and Frank.  The robot represents societies’ fears about dementia, that it’s a kind of living death, that if we lose our memory we cease to be.  There are deep rooted philosophical assumptions that underpin this conception, that cognitive impairment necessarily means losing our humanity.  As a society we tend to separate and privilege the mind over the body, recognising cognition as essential to personhood.  In a sense, for the robot, which has been created to replicate this very idea of human cognition, this fear is realised in the final act of the film.

Frank on the other hand, even with his failings and the tragic consequences of his cognitive decline, remains a person.  What remains of himself may be less fitting to the world and the people that surround him but Frank’s humanity endures.   This is because unlike the robot, Frank’s selfhood is made up of more than cognition alone.  He exists in the world differently to the robot.  There are aspects of Frank’s being that are pre-reflective, that reside below the threshold of cognition that are acted out through the body, like the picking of locks for example; that rely on emotional response, as we see through his affinity with and affection for his ex wife (although not remembering who she is); and finally that rely on the successful deployment of social practices learned through processes of socialisation that provide people with the know-how, skill and disposition to act appropriately in their social worlds. The social nature of what make us uniquely human is made clear during the party scene in the film when the robot is incapable of exchanging social pleasantries.

What is interesting about this contrast between Frank and the robot is that it highlights Frank’s enduring humanity.  This has significant consequences for thinking about dementia care, as it suggests that attending to and promoting aspects of selfhood are important and that these aspects of care are themselves humanising.  Robot and Frank, in a very light touch way, raises profound questions about the relationship between memory, identity and humanity and perhaps challenges the image of dementia as a living death.

‘The Mother of the Muses’ a poem by Tony Harrison
Hannah Zeiling (2013) ‘Dementia as a cultural metaphor’ in The Gerontologist
Pia Kontos (2004) Ethnographic reflections on selfhood, embodiment and Alzheimer’s disease in Aging & Society, Vol. 24, pp. 829-849