Representation of Alcoholism in The Master

Below is an essay from Neil Jones, consultant psychiatrist at the Cardiff Royal Infirmary Community Addiction Unit.

In looking at the depiction of alcoholism within Paul Anderson’s “The Master” it is worth considering 4 aspects:


Diagnosis
From the first graphic scenes in the film it is clear that its main character, Freddie, a World War 2 US sailor played by Joaquin Phoenix, is an alcoholic. But what do we mean by the term ‘alcoholic’, or to give it its preferred modern term – alcohol dependent?  Alcohol dependence, as defined by the World Health Organisation’s International Classification of Diseases (10th Edition) ICD-10, is a clinical syndrome requiring three or more of the following characteristics:

1.        A strong compulsion to drink
2.        Difficulty in controlling your drinking
3.        A tolerance to alcohol (your body and brain seem to get used to alcohol – it seems to have less effect on you)
4.        And coupled with this, a withdrawal syndrome if alcohol is suddenly removed.
5.        A neglect of alternative activities
6.        Continuing to drink despite physical and psychological harms.

Freddie ticks most of the boxes for a diagnosis.

Surrogate Alcohol
Freddie’s pathological desire to drink is reduced at times to the very risky use of surrogate alcohols, even apparently the use of small amounts of thinners, a higher carbon chain solvent which can be highly toxic.  There is some interesting research in Russia and other Eastern European states, some of which has been published in the Lancet, detailing the extent, danger and mortality in consuming ‘non-beverage alcohols’. One has to wonder whether the odd facial gestures and posture hint at the toxic effect, maybe neuropathy, are the result of such alcoholic concoctions. 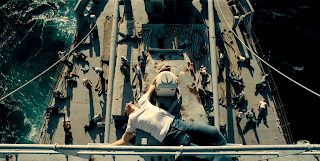 Aetiology
The aetiology (cause) of alcohol dependence is multi factorial, and again the film cleverly gives us clues, telling us a little of Freddie’s background.  We know he had an alcoholic father.  Estimates put hereditability at about 50% in the causation of alcohol dependence, but like so many areas of psychological medicine there is no simple single genetic cause. Instead there seem to be lots of genes each increasing the predisposition to alcohol problems. Environmental factors are important too, and we can imagine Freddie grew up with his heavy drinking father.  He joined the US Navy, where alcohol is likely to have been seen positively.  He also gives us the tiniest clue about his military service – killing Japanese, but also the guilt he felt hurting someone who stole his alcohol.  The connection between active military service and the increased likelihood of both alcohol disorders, and PTSD is well understood.  The interaction between the 2 disorders though, is less well known, and is the subject of ongoing research.

As the film develops we are witness to more and more of the problems that both alcohol causes for Freddie, but also the support he takes in it.  Demobbed from the Navy, Freddie struggles to adjust to civilian life; he develops no real support structure, alcohol getting in the way of relationships and work.

Therapeutic factors
It’s not certain that Freddie is looking to make any change in his alcohol use when he stumbles across the charismatic leader of the Cause, Lancaster Todd.  Freddie finds something in the Cause, despite its very clear shortcomings, and is ‘encouraged’ to talk, to communicate during the ‘processing’ sessions.  A therapeutic relationship of sorts develop between the two, but also the other members of the Cause become a positive supportive network – at least in  encouraging Freddie to change his drinking. Although we don’t see the actual alcohol withdrawal process, Freddie displays clear agitation and distress repeating his drills over and over during this period.

When we see a different Freddie, canvassing in Arizona, he is more involved, and we imagine he has stopped drinking.  The reason for this cessation is unknown, merely hinted at when he takes off in search of Doris, an earlier girlfriend. On being told of her marriage it is suggested that Freddie relapses into drinking.  He is called back to the Cause, relocated to England, but declines and our suspicions are confirmed – he has indeed relapsed.