Runt: taking part in the making of a short pilot By Katie Featherstone

The following is a special blog piece written by Katie Featherstone outlining her experience of being on set of a short pilot: Runt.

As I write, wailing and howling comes from deep in the woods, crashing through the peace of the countryside. We are in remote Camarthenshire and the 30 strong film crew swarm round a beaten up 4x4 carrying a camera and a generator. Drunkle (the main character) is driving the car down the narrow country lane. ‘Runt’ is a short pilot based on the Niall Griffiths novel examining the aftermath of the foot and mouth outbreak on rural communities in South Wales, funded by the Film Agency for Wales, The University of Glamorgan and the MEDIA Programme Of the European Union.

This is my first collaboration with Fizzy Oppe of Fragrant Films, a film producer and sciSCREEN regular – we (plus Jamie) are working on a Broadcast Development Award application for the Wellcome Trust (who are very encouraging) to co-produce a short film examining issues of mental health. To kick-start this project, I had planned to visit Fizzy on the set of her current project ‘Runt’. Fizzy has already managed to rope my partner (Nick) into the project - his facility and production company is supplying the RED camera and lighting – when she calls the day before the shoot asking if I would play one of the characters- the only requirement is that the actress must be a redhead. She is clearly desperate, so although a little taken aback, I say yes, happy to help, but….. I have a busy week…... Fizzy instantly replies ‘Katie darling, perfect, thank-you, this is the first scene, see you in the morning’ and puts the phone down.

When I turn up for the technical rehearsal the following morning, I am introduced to the crew as ‘Bethan’ the character. During the day the crew ask how long I have been an actress- erm, 5 minutes? I discuss my character with the director (Ieuan Morris), what do I need to do in my scene, and how ‘smiling, she gives an apologetic wave’ should look. Once I get home, I read the script again and notice it says ‘waving, she gives an apologetic smile’, this changes everything and I practice in the bathroom mirror.

We arrive on location: a small hamlet in the middle of nowhere, with the pub our location base. After lunch the first assistant director (Sarah, there are three AD’s on the shoot) calls ‘Bethan, time for make-up’ and the two make-up artists (Nell Bat and Catrin Williams) give me a wonderful florid pink bruise and a dressing, then hand me over to the costume designer (Alison Saunders) who shows me an array of dowdy costumes. We dissolve into giggles as we pick perhaps the most extreme costume, a pale blue cotton nightdress, a faded dressing gown and a pair of her mum’s very old and worn fluffy slippers. Everyone laughs when they see me, I embody dowdy and vulnerable. It is 1.30 and as I walk out of the pub into the daylight a group of locals drinking pints of larger outside all stop and stare and one stands up and looks very concerned asking ‘Are you ok?’ make-up and wardrobe have obviously excelled themselves. I head over to the crew and Nick looks shocked but also highly amused and proceeds to take pictures, emailing them to a number of our friends. 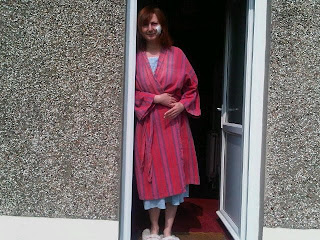 My status seemed to change once in full make-up and costume and classified as an ‘actor’; the care I received was fabulous- I had my own water bottle, endless offers of tea, not allowed to carry anything and a chair provided while we waited for the crew to get the scene ready. I have never had such attention. It was clear that the actors hang out together on set - so I spent the morning with Richard Harrington – by now transformed into Drunkle (a dark and brooding makeover), who was very kind and welcoming.
We go through three rehearsals of ‘Boy leaves the house and Bethan waves from the doorway giving an apologetic smile’. For the first take I come out onto the front step, wave and go back inside closing the door, for take two I come out to the step and stay there, for the third and final take I stand in the doorway and stay there to the end of the shot. The director is pleased with this and it felt right to me- I don’t think a battered and bruised woman would leave the threshold - one of my guilty pleasures is watching ‘The Actors Studio’. I spend the rest of the day watching the crew and the actors (Richard Harrington and Jams Powys) at work; they both give powerful performances to camera, take after take and I enjoy watching their characters unfold. Another key character is Arrn, an outstanding performance by Geoff the greyhound, who during one particularly emotional scene steals the show by putting a comforting paw on Boy’s leg while looking at him with his large sad eyes. As the director says ‘cut’, the entire crew spontaneously gave Geoff a round of applause.

At the end of the day the crew re-convene at the local pub, and as the locals order rounds of WKD and port (yes, really), I laugh with the Director of Photography (Timo Salminen) asking him for reassurance that my scene will look haunting and he teasingly apologises for not having time for my close-up, the Director thanks me for a wonderful performance and gives me a hug and Richard thanks me with a kiss goodbye. They are all extremely kind given my obvious lack of any talent….but watch this space, there is a long tradition of women who have played ‘dowdy’ going on to win Oscars- Nicole Kidman (The Hours), Charlize Theron (Monsters), Halle Berry (Monsters Ball), Sandra Bullock (The Blind Side) …

I hope we can premier Runt at sciSCREEN, this film touches on issues of grief, suicide, social deprivation and regeneration, emphasizing the importance for farming communities of maintaining a strong connection with the land and the devastating effects of the foot and mouth crisis in 2002. It would also be a chance for us all to meet and support local film-makers, the crew were mainly young filmmakers based in Cardiff, some had heard of sciSCREEN and were keen to hear more about what we do. This short film is also only the first step of a bigger project; the team is working towards obtaining funding for a feature length version and perhaps sciSCREEN can support them on that journey.